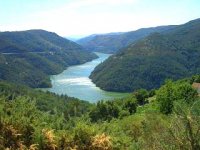 Galicia is located in the green and lush north western corner of Spain. Geographically, Galicia is situated just above Portugal and faces both the Atlantic Ocean and the Mar Cantabrico. This part of the country has an economy based on fishing, farming, agriculture and increasingly tourism. Galicia also has a climate offering four separate seasons and is actually pronounced "Galithia" (the "ci" pronounced as "th" in spanish).

Right, a valley in Galicia's Lugo province in the central part of the region.

Whilst a part of the mainland, Galicia is an autonomous community with a cultural heritage, climate and geography that are distinct from the rest of Spain. 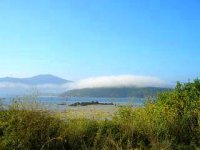 Although the region's history and scenery are often promoted as the areas main vacation attractions, beautiful beaches fill the "rias" (bays) of three of the four provinces in Galicia and the scent of pine and eucalyptus are ever present.

Galicia, and in particular the towns close to "Santiago de Compostela" and its airport, have become increasingly popular with British and American holiday makers over recent years. This part of the Iberian Peninsula offers a taste of "real" Spanish culture, taking you away from the tourist frequented Costa's and into a greener and more culturally defined part of the country. Here you can escape the commercialism that has tainted so many other European holiday destinations and explore a region rich in history, tradition, culture and architecture. Left, a further taster of what the scenery of Galicia has to offer.

In terms of getting to Galicia, "Santiago de Compostela", the provincial capitol of "la Coruna" and Vigo (in Pontevedra) all benefit from International airports, although "direct from the UK" flight schedules are limited.

You can click on the Getting to Galicia buttons in the left hand menu to find out about and book flights and car rental etc.

Galicia is frequently described as green Spain, a result of its temperate climate and elevated rain fall, at least when compared to the resorts of Spain's hotter South.

The landscape of Galicia is lush, mountainous and peppered with forests of pine and eucalyptus, but just like the rest of the Iberian regions it has a high level of autonomy and provincial self determination. This ensures that whilst the population are Spanish, they see themselves primarily as "Gallegos" - so when the Galicians talk about nationalism, they are generally referring to the "nation of Galicia", rather than the nation of Spain!

Right, just one of the multitude of beaches stretching along the undulating coast line of Galicia. This one is in "Porto do Son" in the la Coruna province.

@peapodmcgee empanadas were invented in northern Portugal & Galicia in Spain. Passed on from Eastern influence, most likely the samosa. Thu, 22 October 2015 06:34 PM

@ClarkeMicah @cjsnowdon In Spain there is a movement for reform: quite absurd Galicia on the same time as eastern Germany #ReformaHoraria Sat, 24 October 2015 01:43 PM