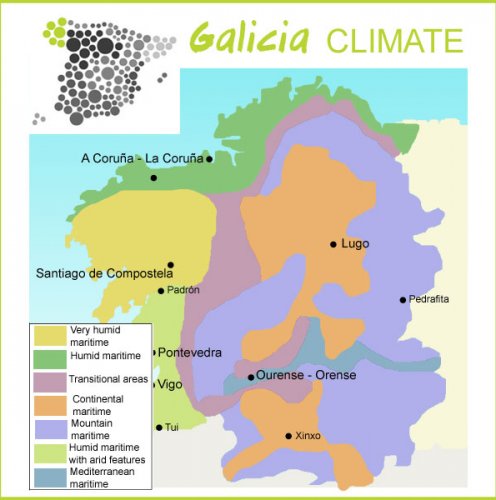 The Macmillan Encyclopedia describes Galicia as follows: "A medieval kingdom in NW Spain, now an autonomous region. Colonized by the Visigoths from the 6th century, it became a sub-kingdom of Castile in the late 11th century. It has retained its own flourishing language and culture." It also list another Galicia located in Poland and the Ukraine, the two are unconnected.

Galicia has a relatively low population of around three million inhabitants spread across four provinces and an area of about 11, 500 square miles. These provinces are: Lugo, Ourense, A Coruna and Pontevedra. In addition to the regional capitol of Galicia, each of these provinces has its own provincial capitol city.

Historically, Galicia was one of the poorer regions in Spain with an economy focussed on fishing and agriculture as opposed to manufacturing. Galicia is also sometimes perceived as being under developed and less cosmopolitan than some of Spains southern and central regions. It also has an unusually low non Spanish popoluation which, as an example, includes less than 800 native English speakers.

After the arrival of General Franco, much of the autonomy of Galicia, including its language Gallego, was removed and outlawed in schools. The Galicians resented this denial of their history and it still sits uneasily with them today. Since a more democratic government was returned to Spain, Galicians have embraced every aspect of their regional and cultural heritage.

Despite a view of Galicia as one of the poorer provincial Spanish cousins, the region is rich in both agriculture, fisheries and more recently tourism, the latter illustrated vividly by the escalation of property values in this region. Don't be fooled by other Galician sites who suggest otherwise e.g. A four bed roomed house in any large town will cost you upwards of 300K Euros, and that will probably be for a "casa" requiring extensive renovation if not complete internal refurbishment.

Galicia has a temperate, four seasoned climate enabling it to grow a wide range of vegetables, some of which would otherwise be unavailable in the Iberian Peninsula. Farming and fishing sit hand in hand as the primary revenue sources for this part of Spain, but tourism is catching up.

Galicians also claim to be of Celtic origin, but I will stay away from that discussion.

If you want to offend a Galician, suggest that their provinces were once in the hands of the Moors and under Islamic rule. Many British and Americans assume this and the Muslim Council of Great Britain claim it to be the case, but it is none-the-less total rubbish. The Galicians fought off the Moors when they attacked Santiago de Compostela, killing many of them and taking even more into slavery. The remainder ran off, never to be seen again. It was the north eastern region of Spain that succumbed to the Moorish invaders and, for a brief period in history, was under Islamic rule.

what is galicia spain famous for? | Yahoo Answers

Galicia is a Celtic area in Spain and the music has a strong Celtic influence
The bagpipe is the symbol for Galicia because it is most used in traditional music
Galicia's language, Gallego, is a Spanish dialect that has more in common with Portuguese than Castellano
Over 4,000 fiestas are held in Galicia each year
Santiago de Compostela, the capital city of Galicia, is the final stop on the famous 'Camino de Santiago' pilgrimage route through Spain, and the body of St James the Apostle is traditionally believed to be buried here.