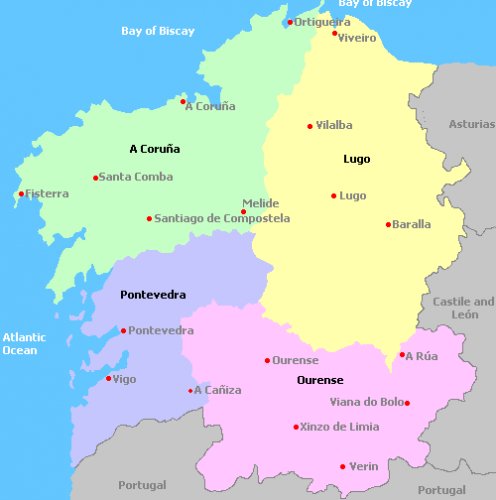 Galicia is an autonomous community situated in northwest Spain. It covers a total area of 11, 418.7 square miles and is home to over 2.79 million people. The community is given the official status of a nationality of Spain. The community is bordered by Portugal to the south, Castile and Leon and Asturias to the east, the Atlantic Ocean to the west, and the Bay of Biscay to the north.
Santiago de Compostela located in the province of A Coruna is the capital city of Galicia. Galician is a Romance language and is most widely spoken in the region along-with Spanish. The pre-dominant religion in Galicia is Christianity adhering to Roman Catholicism.

The history of the region of Galicia in Spain spans many centuries. From the sixth century it was colonized by the Visigoths and went on to become a sub-kingdom of Castile by the late eleventh century. In the eighteenth century, the territories of Spain were divided and the autonomy of Galicia was called off. It was organized as one of the the administrative units of Spain. Thereafter in the latter half of the twentieth century, Galicia came under the reign of General Franco who put an end to the autonomy of the region by outlawing language and other social areas of the region. This led to an unrest among the people and a rebellion. However, it was only after the death of the General in 1975 that Galicia became autonomous and a democratic community.

Galicia is a devolved government that functions in the framework of a constitutional monarchy.

The economy of Galicia is heavily dependent on agriculture, and fisheries. Tourism is also a major part of the economy. A Coruna, Ourense, Pontevedra, and Lugo are some of the major places of tourist interest. Santiago de Compostela is an ancient pilgrimage city and draws a number of visitors. Buildings of Romanesque architecture and castles are found in plenty in Galicia. 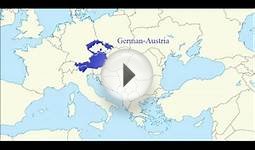 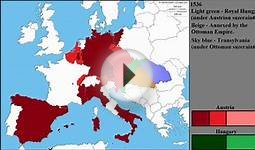 The History of...: Austria & Hungary